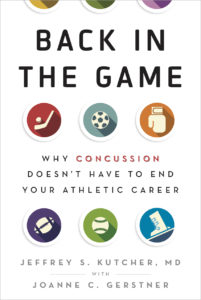 Back in the Game is the 2017 Clarion Award winner for best non-fiction book!

Back in the Game, co-authored by pioneering sports neurologist Jeffrey S. Kutcher and award-winning sports journalist Joanne C. Gerstner, is the definitive guide to sports and concussion for youth parents, coaches and athletes.

Medium description:
Back in the Game, co-authored by pioneering sports neurologist Jeffrey S. Kutcher and award-winning sports journalist Joanne C. Gerstner, is the definitive guide to sports and concussion for youth parents, coaches and athletes. The topic of concussion in youth sports was relatively unheard of 10 years ago. Today, concerned parents are considering removing their children from participation in contact sports such as football or soccer. Back in the Game is a real-world based discussion of concussion and youth sports, with Dr. Kutcher’s clinical expertise blended with Gerstner’s reporting. World Cup and Olympic champion Kate Markgraf, X Games superstar Ellery Hollingsworth, former NFL quarterback Eric Hipple and an array of today’s youth coaches, parents and athletes honestly discussing concussion. 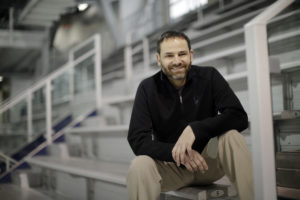 Jeffrey S. Kutcher MD is an internationally recognized sports neurologist and pioneering physician researcher. He is a graduate of the Tulane University School of Medicine and the University of Michigan Neurology Residency program. He founded the American Academy of Neurology’s Sports Neurology Section and was the neurologist for Team USA at the Sochi 2014 Winter Olympics. Kutcher is the national division chief of The Sports Neurology Clinic at The CORE Institute. Twitter: @JeffKutcherMD 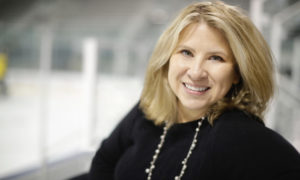 Joanne C. Gerstner is an award-winning multimedia sports journalist, who focuses on sports and medicine. Her work has appeared on ESPN.com, in the The New York Times, USA Today, Detroit News, and other publications. She is a graduate of the Medill School at Northwestern University, a 2012 University of Michigan Knight-Wallace Fellow, and 2015 Jacobs Foundation Neuroscience Fellow. Gerstner is a professor of sports journalism in the School of Journalism at Michigan State University. Twitter:@JoanneCGerstner